Given long standing economic inequities and a rapid recent rise in the middle-class, many South Africans lack the knowledge and experience of financial management. Formal financial education programs are absent from many secondary schools, many young adults are forced to learn from informal sources, including friends and family. However, generations of South Africans have had little need for financial management, given limited opportunities to build personal economic capital. With increasing economic opportunities, the youth of South Africa increasingly needs some basic knowledge to manage their finances properly. According to Glenn Gillis, CEO of Sea Monster, financial education is a notoriously difficult topic to teach. Not only does it consist of many different concepts and topics, but is a heavy topic that hits close to home. Old Mutual has found that youth are not comfortable meeting with a financial advisor in person. Hein Pieters, Digital Intermediary Experience Manager at Old Mutual, expressed that having another medium for the youth to learn about financial management can assist in relaying the necessary information using a more accessible and useful platform. 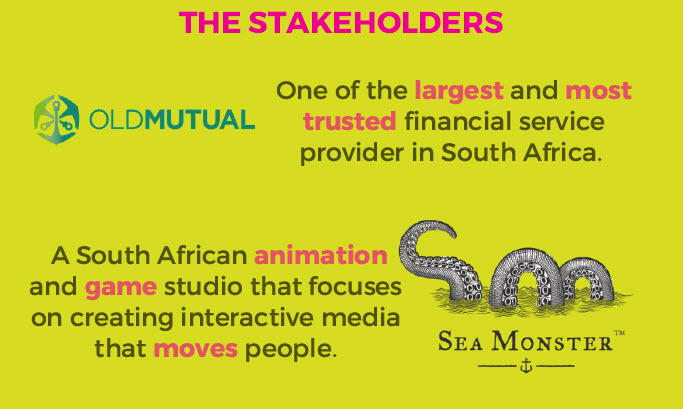 Sea Monster is an animation and game studio that concentrates in business-to-business and business-to-business-to-consumer interactive media. With world renowned clients such as Facebook and Amazon, Sea Monster aims to bring educational platforms to those who may not have access to other avenues. As expressed by G. Gillis, they are “driving the democratization of education”. Old Mutual is one of the largest and most trusted financial service providers in South Africa with over 28,000 employees in 17 countries around the world, including 13 in Africa. Old Mutual offers products and services intended to provide accessible, top of the line, financial services to its customers. 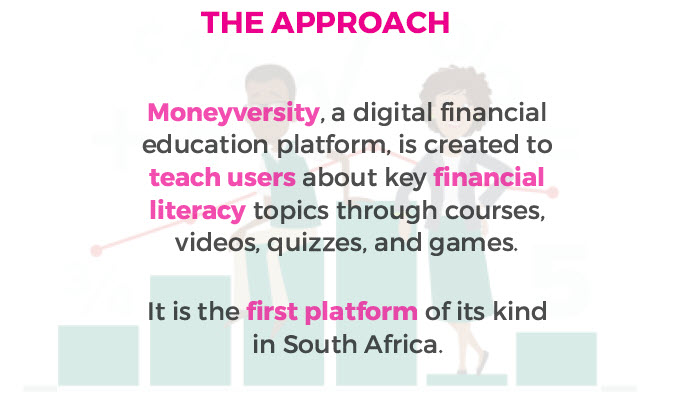 Old Mutual and Sea Monster partnered together to create Moneyversity, a revolutionary financial education platform that provides courses on many concepts of the financial landscape, such as investments, bonds, and risk. The platform launched in 2015, featuring quizzes, animated infographics, and videos. According to Simba Thema, Senior Project Manager at Old Mutual, supplementary games including the large serious game #Adulting allow players to apply the concepts learned through Moneyversity to more lifelike scenarios. Thus far the platform has undergone frequent enhancements, including the 2017 launch of Moneyversity 2.0, to implement new courses and features based on user-feedback. S. Thema expressed that moving forward, Old Mutual plans to expand the Moneyversity platform to connect with different departments of the company, allowing for users to settle all their financial needs within the Moneyversity ecosystem. According to G. Gillis, Moneyversity is one of the largest and most unique financial education platforms globally, and is the first of its kind in South Africa. A platform of this caliber allowed Old Mutual to leverage South Africa’s growing access to technology and internet. Old Mutual is able to use the medium to bring financial education to those who may not have access otherwise. The platform specifically appeals to younger clients, helping many begin to understand and manage their finances.

No platform like Moneyversity has been created in South Africa. Creating a project of this caliber required a shift in the outlook of Old Mutual in order to convince it to move into unknown territory. S. Thema expressed his struggle to get his superiors to buy into Moneyversity and its purpose. Many of the executives at Old Mutual indicated that they are fond of the pen and paper approach to financial education involving customers coming in, speaking to financial advisors, and learning about their financial situation. However, as explained by S. Thema, research by Old Mutual indicated that South Africa’s younger generation do not value or learn from this approach. A more digital approach is more attractive to younger customers and creates more engagement. Old Mutual decided they needed a partner that would take a journey with them to deliver a groundbreaking product. It was important that the developer was a South African based company who, according to Hein Pieters, “understood the South African culture, who understood the South African needs, and could relate to building certain digital elements where people in South Africa to them”. Old Mutual found Sea Monster to be the company that could produce the highest quality work. More importantly, Sea Monster was creative in its approach to projects that would prove to enhance the platform. In 2012, Old mutual invited Sea Monster to offer eight presentations on serious games over the course of six months. Through these presentations the two companies were able to connect and gain enough trust to start moving forward with the project. Old Mutual produced a strategy for the next five years of their financial education plan and modified it with the help of Sea Monster. According to G. Gillis, the companies spent the next two and a half years developing the platform. Old Mutual and Sea Monster used play-testing and feedback sessions to identify exactly what young adults wanted to see on the platform. The game has constructed a player base that is motivated to both use the game platform and remain loyal to the Old Mutual brand. As explained by S. Thema, these young players progress through their careers, gaining more financial capital, they will be more likely to use Moneyversity for their financial service solutions since they already have been part of the game ecosystem. Moneyversity allows Old Mutual to use this young player base to secure a market for the future. Old Mutual took advantage of specialists to ensure that Moneyversity was an effective learning platform. S. Thema explained that Old Mutual had an expert in the learning and development space look at Moneyversity and give input. The expert pointed out that the platform was not clear in how it was benefitting the user. It never clearly explained what the user was going to learn, the user’s objectives, and why the user should continue to use the platform. When a user enters the platform, they need to be clear about what the platform is going to do for them and why they should use it. An additional challenge with Moneyversity is that it is not engaging players with a diverse knowledge base. S. Thema indicated that the quizzes presented in the game are not varied relative to the skill or knowledge level of the user. Players may need a second or third level of quizzes to ensure that they continue to be engaged and continue to learn from the platform. Moneyversity provides additional incentive to use the platform with its integration with Old Mutual’s rewards program. According to S. Thema, this program rewards users based on their financial behaviours. For example, if you are saving money correctly you will receive a certain number of points that can be redeemed for such things as gift cards, or discounts. This motivates players, incentivising players to follow and use what they learnt in the Moneyversity courses in real life. While Old Mutual is not receiving direct financial benefits through Moneyversity, the company is gaining data from player usage. S. Thema explained that the game metrics that Old Mutual collects include assessments of which courses are most frequently launched, how many players are passing or failing each course, the number of new and returning users, which pages are most popular, and user demographics. The data gathered gives Old Mutual a better understanding of how people use the platform. It also allows Old Mutual to identify which modules are important to players, and which are not. With this information, insights and recommendations on the game are made monthly allowing Old Mutual to adjust the game as needed. Old Mutual believes that Moneyversity has met all of the goals of the company, but have reflected that those goals may have been set too low. According to S. Thema, Old Mutual was extremely cautious in venturing into this pilot program, and now believe that setting more ambitious goals may have led to a better outcome. H. Pieters believes that Moneyversity could have a much bigger footprint than it currently does. With a more aggressive marketing plan, Moneyversity has the potential to expand its reach and impact new audiences. Old Mutual experimented with a more aggressive marketing approach in August 2017. During this time, Moneyversity was presented on various social media platforms including Twitter and Facebook. According to S. Thema, traffic to the platform skyrocketed as a result of this marketing effort.