In this digital age people receive and respond to information in different ways. Interactive solutions, such as games, are an effective way to both teach people, and to address sensitive issues. David Cosham, Newangle’s Design Director, expressed that games are an effective medium to convey these messages to a variety of audiences, transcending age boundaries. While traditional museums passively show visitors information, games allow for engagement with the information. This engagement allows museum visitors to more easily retain information. 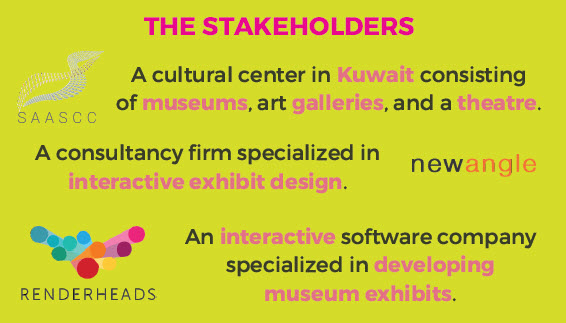 Renderheads is a United Kingdom based interactive software company that specializes in developing museum exhibits. Some of the exhibits produced by Renderheads include the Visions of the Universe exhibit in the National Maritime Museum, and the Video Wall in the Museum of Science and Industry, both located in the UK. Renderheads also has a Cape Town office that takes on a lot of the company’s long-term projects. Renderheads also partakes in developing serious games, such as the 2016 Serious About Games Competition winner Vukuzenzele, and tends to implement elements of serious game into their museum exhibits.

The Sheikh Abdullah Al Salem Cultural Center (SAASCC) is a cultural complex located in Kuwait that houses six different museums and galleries with a total of over 1,100 exhibits. SAASCC consists of a natural history museum, science and technology museum, a fine arts centre, Arabic Islamic science museum, space museum, and theatre. It is the work of over 96 sub-contractors from 13 different countries, and is a symbol of international collaboration.

Newangle is an independent creative digital agency and consultancy firm that specializes in designing interactive and immersive museum exhibits of all different sizes. Newangle was contracted by the SAASCC to create many of their exhibits. 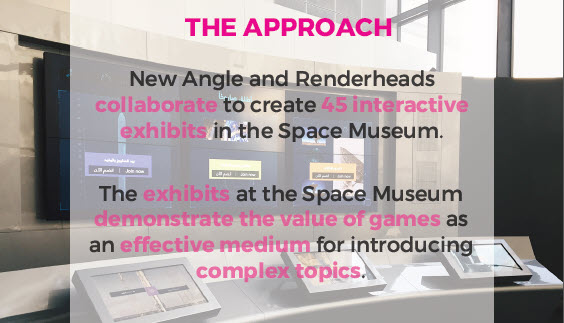 According to David Hecker, Renderheads’ Project Manager, Renderheads was contacted in 2016-2017 by Newangle to assist in developing and implementing exhibits for the planned SAASCC Space Museum in Kuwait. The project would include creating over 45 different exhibits, consisting of two different types: informational and interactive videos and slideshows, and operative experiences, many of which being serious games. The Space Museum opened in 2018 and the level of interactivity present in the exhibits contributes to it being one of the most revolutionary museums of its time.

The games developed for the Space Museum demonstrate the value of games as an effective medium for introducing complex topics. D. Hecker presented an example of the Space Museum exhibits. The multiplayer game, Countdown Mission Control, gives its players the challenge of working together to launch a rocket into space. The game puts the players in charge of different components required to launch the rocket, such as the fuel and ideal weather conditions. Each player is required to complete their tasks before the time is up to launch the rocket. The players also need to communicate to ensure that they are all completing the tasks correctly before launching the rocket. This game teaches its players about both the basic needs of launching a rocket, but also about the power and necessity of teamwork. Games like this are scattered all throughout the Space Museum exhibits and give the museum its unique appeal for a diverse audience.

Newangle was hired by Cultural Innovations, an exhibit design company, to create a number of exhibits in the Kuwait Space Museum. Having worked with Renderheads before, Newangle chose to contact them again. Renderheads first provided feedback on the majority of Newangle’s exhibits, and then chose which they were interested in developing. Overall, the negotiations took around six to eight months. During that time, D. Hecker explained that the partners conceptualized the exhibits, defined design outlines and established a budget for the project. After coming to an agreement, the development of the 45 exhibits took 56 weeks.

The distance between Newangle in the UK and Renderheads South Africa did not majorly influence the business arrangement. Effective communication nullified the distance. Both Newangle and Renderheads were very succinct and objective about their expectations and needs for the project as explained by D. Cosham. Additionally, a large amount of detailed documentation was exchanged between the two organizations throughout the development process, allowing them to be on the same page at all times.

Given that the exhibits are difficult to change after they are implemented and must be perfected beforehand Newangle invested in rigorous play-testing in the form of focus groups. The focus groups mainly consisted of youth aged 8-14. The players filled out forms upon completion of the test, rating their experience and expressing their learning outcomes. These focus groups gave the developers an idea of what they were doing right and wrong and direction for any necessary modifications.