In countries such as India and the Philippines, outsourcing is a flourishing industry. According to Gareth Pritchard CEO of BPESA, there are over 1.3 million workers in the outsourcing industry in the Philippines alone. The industry consists of call centres who are contracted by large corporations such as Amazon and Google. Business process outsourcing is a fairly new industry in South Africa, but it is growing fast. In 2014, only 20,000 employees were in their call centres, indicated G. Pritchard. This number has since risen to around 215,000 today, but there is still potential to expand the industry.

In South Africa, the potential benefit of these call centres and business process outsourcing industry is substantial. There is a very high national unemployment rate of 27.5%, and even higher youth (15-24) unemployment rate of 53%. Almost 10 million South Africans make up the 15-24 year old age group, but most do not have access to employment opportunities. Call centres do not require much previous work experience and are potentially an accessible employment field for South Africa’s young workers. However, reaching a large percentage of youth has proven t challenging through traditional recruitment methods like online or paper applications. A more accessible, youth targeted approach was needed to get the most out of the vast employee pool. 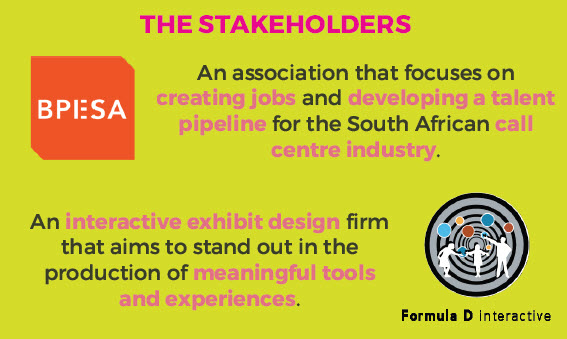 Formula D is a Cape Town based interactive exhibit design firm that strives to become a world leader in the design and production of meaningful interactive tools and experiences. Even though Formula D brands itself as a museum exhibit design firm, they have plenty of experience with designing and developing serious games. Some of their previous projects include Swazi Yolo, a game made for HIV awareness and prevention, and Eskom Energy Planner. 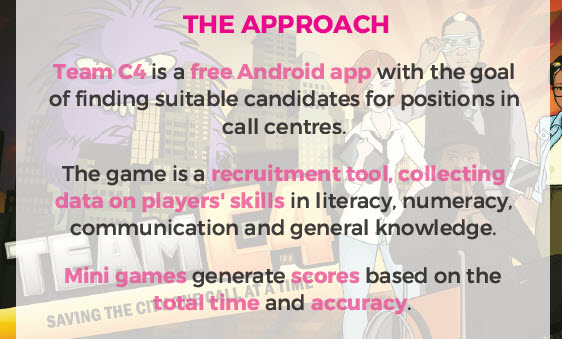 BPESA teamed up with Formula D to create the mobile game Team C4. The game is a free to download recruitment tool that tests users on four main metrics: numeracy, literacy, general communication skills, and general knowledge. These were identified by BPESA as the main skills that needed to be measured to identify talented youth for employment. Mini games require the player to use those skills in order to progress through the game and players are measured on their success.

For example, to test numeracy, Traffic Troubles asks the players to solve various mathematical problems in order to alleviate the traffic of the city. The score is calculated based on the time the player takes to succeed, the number of tries, mistakes, and correct answers. Players are ranked based on their score totals. G. Pritchard said that BPESA is able to then send the names and contact details of high scoring players to call centres who are looking for workers with those skills.

A last piece of data that is collected from each player is a voice recording. According to G. Pritchard, these call centres partner with international companies, and it is important that people from all around the world are able to understand their employees.

The relationship between BPESA and Formula D started in 2013 when BPESA Western Cape’s CEO, Gareth Pritchard, started a conversation with a committee member from the Cape Town planning for the World Capital Design award in a lift. BPESA was looking to create a low-cost and effective way to reach South Africa’s youth. The committee member recommended speaking to Michael Wolf, also a member on the committee and CEO of Formula D. The game-based approach that Formula D offered seemed to be the best way of addressing BPESA’s problem. As indicated by Gareth, the decision to move on with Formula D was a mix of their established reputation and a gut feeling from BPESA.

BPESA was given 3 million ZAR (213,000 USD) from the Rockefeller Foundation to create Team C4 from start to finish. The game took about one year to be developed. The first three months of development were spent researching the industry and the game’s target audience to identify how to best engage them in the game. According to Marco Rosa, Manager Director at Formula D, the rest of the year was spent developing the game, with playtesting sessions being held by Formula D throughout.

During Team C4’s development, M. Rosa said that Formula D quickly found that the 3,000,000 ZAR (213,000 USD) allocated to the game was not nearly going to be enough. A large part of Formula D’s game development process is performing play-testing sessions. These sessions allow Formula D to gather feedback from the games target audience which they are then able to implement into the game. Formula D used up the majority of the money on developing the game and were not able to conduct as many play-testing sessions as they felt were needed.

In addition to insufficient play-testing to adjust the game to the target audience, BPESA’s Chief Skill Officer, Clayton Williams, admits that within the industry of outsourcing, changes needed to be made to adjust to this new recruitment approach. By not informing the companies about the benefits of the new recruitment system provided by Team C4, businesses were not inclined to use it when the game was launched.

When it was time to take the game to market, problems arose due to the small budget given to the game. BPESA and Formula D were unable to market the game to their target audience.

In addition, according to M. Rosa, hardly anyone was exposed to the game and consequently, few people ended up playing the game. High data prices in South Africa limited the amount of users as players were unwilling to pay the high prices. As of March 2018, 500MB of data will cost a South African user an average of 79 ZAR (5.72 USD). The game requires internet access to be played and, given the target audience of the game, unemployed youth most likely would not be inclined to spend their data on playing the game.

BPESA’s attempted to fix the problem by approaching various cell service provides in an attempt to allow users to run the game without using their own data. The companies refused. G. Pritchard suspects that young people would rather be using their data on other apps, such as Facebook and Instagram.

Even though the first attempt at deploying Team C4 was not successful, there still is hope for the future success of the game. M. Rosa has spoken about renegotiating partial ownership of Team C4, which would allow him and a team of specialists to develop a new business model for the game. M. Rosa has indicated that the generated revenue from the use of the game would be shared with BPESA, making it a compelling offer to the company. G. Pritchard shared that he wants to see Team C4 reach its goals, and that if M. Rosa wanted to pursue the promotion of the game, BPESA would support them in that endeavour.