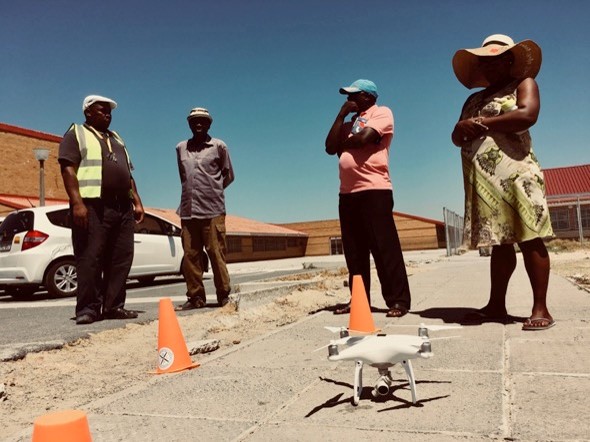 The Serious About Games challenge has concluded with Reblok, the team that won R1 million to develop a serious game that would tackle a social or development issue within the Western Cape, launching a prototype tool called Vukuzenzele. It’s a reblocking simulation housed within an interactive cabinet that has allowed a community within AT section in Khayelitsha to reconfigure the layout of its informal settlement and meet the competition’s goal of ‘reimagining communities’.

The Serious About Games challenge was launched in late 2016 by the Western Cape Department of Economic Development and Tourism (DEDAT), in partnership with the Cape Innovation and Technology Initiative (CiTi), the Cape Craft and Design Institute (CCDI), and Interactive Entertainment South Africa (IESA), with additional assistance provided by the 67games initiative.

An open call was put out for any interested parties to attend free workshops hosted by the partnership to learn more about the intention behind the competition and find suitable collaborative working partners. They were then asked to submit their entries. Four finalists were given R50 000 to develop a prototype and then a winning team, Reblok, was selected to receive R1 milllion to develop its project for a 2018 launch.

Reblok is a collaboration between development house RenderHeads, which makes interactive museum installations and games, and NGO iKhayalami, which develops low cost methods to upgrade informal settlement infrastructure within the bounds of the law to create safer communities. One of its methods is reblocking, which serves two purposes. The first is functional: informal businesses and services, as well as residents, are rearranged into new configurations that better suit their needs and requirements, such as a spaza shop being moved closer to a transport hub and a family with small children being moved further away from a shebeen. The second is for safety, as reblocking incorporates fire breaks and thoroughfares into the layout that are large enough for emergency-services vehicles and personnel to access.

Before the Vukuzenzele tool was developed the iKhayalami team would go out into the field and measure all the structures by hand. They would then cut individual wooden blocks to represent all the structures and, finally, work together with community leaders by rearranging all the blocks on a map to determine suitable new configurations for the settlement. This was both a time consuming method and it meant that fewer members of the community were able to participate in the remapping process and offer their input.

It was a natural fit to bring technology into the method to make it more efficient and less time consuming. Digitisation has speeded up the process considerably and made the efforts more democratic as anyone can now participate by taking a turn at the Vukuzenzele cabinet and running the simulation to rearrange the layout. The data of that person’s efforts can be captured and analysed and there’s no restriction on the number of people who can use the tool. The best solution can then be implemented in the field by iKhayalami.

There were challenges to get to this point, however.

An accurate portrayal of what’s on the ground is needed for the structural data to be reworked in a CAD programme and then imported into Vukuzenzele as individual objects that participants can move around on the game layer of the tool to remap the area.

The initial thought was to speed up the old physical measuring process by using satellite data but, among other concerns, satellite data just isn’t detailed enough. The team decided to try drone capture instead but drone use comes with its own problems that had to be worked around. For example, commercial drone flying has to adhere to a number of legal requirements, which include getting permission to fly over an area and only being able to fly at certain heights. Ultimately, however, these obstacles were overcome and the drone route turned out to be much faster, much cheaper, and more accurate, as well as a test case for the use of drones in tackling social issues.

Gathering data of what the participants have done proved to be another problem. The initial intention was to have the cabinet relay the information via Wi-Fi or a mobile network to RenderHeads’ offices but Wi-Fi is almost non-existent in most informal settlements and in many cases the mobile coverage is also unreliable. Consequently the developers had to put a system in place whereby the data is collected physically from the cabinet and sent on.

The public launch of Vukuzenzele and the pilot experiment doesn’t mean the end of the initiative for any of the stakeholders.

While the tool has successfully met its goals, and right now is being used to speed up the process of remapping informal settlements in Cape Town as funding becomes available through iKhayalami’s partners to complete the physical reblocking process, it can still be improved.

For example, Reblok discovered that gathering additional data from participants via a survey mechanism was disruptive to the sense of flow participants experienced while using the tool. They also found that a grey area was needed to allow rules to be bent, as this would allow for positive outcomes none of the developers had envisioned. As a result, the developers are looking at putting a sandbox aspect into the tool that will allow participants to make unexpected modifications and leave comments regarding their thinking processes, which will result in even better reblocking suggestions.

Reblok also intends to continue fine-tuning Vukuzenzele by developing an iPad version of the tool that will allow people working on the ground to make immediate changes to the map based on the real time data they are collecting in the field.

Meanwhile, the CITI-IESA-CCDI collaboration now has a successful project it can use to market the Western Cape as an important skills hub for businesses and other entities that are looking to develop serious games for marketing, scientific, or data gathering needs.

The 67games initiative has brought the message to a broader community that serious games have a social and educational purpose. This will inspire more people from marginalised communities to become gamers and, ultimately, the next generation of developers.

Finally, the success of the project has seen other departments in the Western Cape government showing interest in how a serious game could be used to gather data and come up with solutions to problems they are tackling. The drone aspect has also demonstrated a way in which the technology can be used for social causes, which will help the push that is currently under way to reduce the legal red tape surrounding the commercial use of drones.

The Serious About Games initiative has exciting plans to continue to promote and assist serious-games development in the Western Cape. You can stay up to date with its projects, and be informed about future calls to action you can participate in, by visiting seriousaboutgames.co.za or connecting with it on Facebook (@seriousaboutgamessa) and Twitter (@SeriousGamesSA).